In My Mailbox is hosted by Kristi at The Story Siren and is all about sharing the news about books we bought, gotten from the library or received for review.

This is the first time I'm participating in a meme so it's all very exciting and new, and a lot of fun. So here's what I got last week and look forward to reading and (hopefully) enjoying:

After a dozen years digging in Megiddo, American archeologist Page Brookstone longs for something new. When an Arab couple propose that Page investigate the haunted ruins under their home, she ignores colleagues' misgivings and heads to Anatot, just outside Jerusalem. There, the couple, along with Page and her team, uncover murals, artifacts and remains suggesting they have come upon the grave of the prophet Jeremiah, buried with the woman he loved, Anatiya, who also has left a manuscript that parallels the Book of Jeremiah. The discovery ignites an international uproar and violent attacks while Page, affected by the ancient spirits, is attracted to Orthodox Israeli Mortichai Master, despite his connections to an organization opposing her efforts.
This book appears to have consistently good reviews and the author is a Rabbi with insight into the Biblical excavation in Israel so I have reason to believe that this novel will be a delight.

Recovering from breast cancer and reeling from her husband’s infidelity, Mia Landan flees her Charleston home to heal in the mountains near Asheville, North Carolina. She seeks refuge in a neglected fishing cabin belonging to her fly-fishing instructor, Belle Carson.
Belle recently inherited the cabin, which once belonged to a grandmother she never knew the legendary fly fisher and journalist of the 1920s, Kate Watkins, whose life fell into ruins after she was accused of murdering her lover. From her first step inside the dusty cabin, Mia is fascinated by the traces of Kate’s mysterious story . . . especially when she discovers Kate’s journal.
I've never read anything by Mary Alice Monroe so I texted a friend with similar tastes to ask about her work. Susan's enthusiastic reply tipped the scales and now this pretty volume is waiting its turn in my Read Pile.

When she becomes a junior lady of Queen Elizabeth’s bedchamber, Rosamund is instructed by her cousin, the brilliant and devious secretary of state Sir Francis Walsingham, to record everything she observes. Her promised reward: a chance at a good marriage. But through her brother Thomas, Rosamund finds herself drawn to the forbidden, rough-and-tumble world of theatre, and to Thomas’s friend, the dramatic, impetuous playwright Christopher Marlowe. And then Rosamund meets Will Creighton—a persuasive courtier, poet, and would-be playwright who is the embodiment of an unsuitable match. The unsanctioned relationship between Rosamund and Will draws the wrath of Elizabeth, who prides herself on being the Virgin Queen. Rosamund is sent in disgrace to a remote castle that holds Elizabeth’s cousin Mary Stuart, the imprisoned Queen of Scots. Here, Walsingham expects Rosamund to uncover proof of a plot against Elizabeth. But surely, nothing good can come of putting an artless girl in such close proximity to so many seductive players and deceptive games. Unless, of course, Rosamund can discover an affinity for passion and intrigue herself. . . .
This historical novel isn't as highly rated as the other two new additions so I'm keeping my fingers crossed. 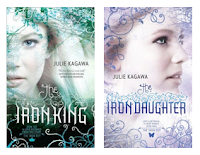 I think everyone has read about the adventures of the half-human half-fey daughter of the faery king in the magical realm of Nevernever and her fight against the Iron Fey for her family, her love and the survival of both human and faery worlds. Everyone except for me that is (as always late to the party). I'm catching up though! After scoring the last installment through NetGalley I realized that it was now or never and requested books 1-3 from the library. Fortunately the wait for Iron King and Iron Daughter wasn't too long but my hands are itching to get Iron Queen soon because I stayed up till 3 AM on Saturday reading Iron King.

Email ThisBlogThis!Share to TwitterShare to FacebookShare to Pinterest
Labels: Meme - In My Mailbox