When you're looking for information where do you first go? I'm betting it's not to the library. With a wealth of information on any given topic available online it's easy to dismiss the library altogether and as far as I'm concerned that is a crying shame. We can get everything scanned and converted into digital files and available at the click of a mouse but what about the sensory benefit of opening a beautifully-bound book for the first time, turning pages that are older than your parents, or even just walking among the stacks, breathing the air scented with paper and ink, and having a whimsically-colorful or gold-lettered spine catch your eye? I'm a huge fan of libraries (if you can't tell yet) and recently I've been thinking about the ones that were the beginning of it all. You know, the libraries in Celsus, Pergamum, Alexandria and a handful of other locations around the world where the enlightened and the curious came to learn.

We've all heard about the library of Alexandria, primarily because it was destroyed and there's not an architectural landmark we can visit, nothing to ground our imaginations in. There are historical records however that tell us about it. The library was charged with collecting all the world's knowledge and it was the first of its kind to gather a serious collection of books from beyond its country's borders. This collecting was very aggressive and involved seizing books from ships that came into the harbor and keeping the originals while returning copies to the original owners. It is impossible to say just how large the wealth of materials was at the library but according to legend Mark Antony gave Cleopatra the entire contents of the Library of Pergamum (200,000 scrolls) as a wedding gift, so if that was only a portion of the collection you can imagine the scope of the whole. The lore regarding the destruction of the library is conflicting but Plutarch wrote that during his visit to Alexandria in 48 BC Julius Caesar "accidentally" burned the library down when he set fire to his own ships to frustrate Achillas' attempt to limit his ability to communicate by sea. 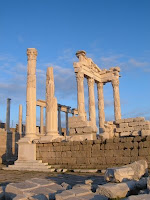 The second largest Hellenistic library after Alexandria was the library of Pergamum, the city that gave the name to pergamus, or parchment, when it was invented to replace papyrus imported from Alexandria. Historical accounts claim that the library possessed a large main reading room, lined with many shelves. An empty space was left between the outer walls and the shelves to allow for air circulation. This was intended to prevent the library from becoming overly humid in the warm climate of Anatolia and can be seen as an early attempt at library preservation. Manuscripts were written on parchment, rolled, and then stored on these shelves. At the height of its cultural glory Pergamum was rivaled only by the cities of Alexandria and Antioch, now the ruins of the city and its library are major archaeological sites in Turkey.

The third great library of antiquity was the Library of Celsus, the smallest of the three (it was planned for only 12,000 scrolls, but unique because it was founded solely with the funds of the man it's named after. It is also unique because after it was destroyed by two earthquakes but was later partially restored. Now visitors can see the facade, which is believed to be a very accurate reproduction, and tour the partially-restored rest of the building. Another thing that makes this library unique is that Celsus was buried in a crypt under the library. At a time when even being buried within the city limits was unusual being buried within the library was a very special honor. I wonder if the crypt is still there, under the ruins...
Posted by Unknown at 9:14 PM