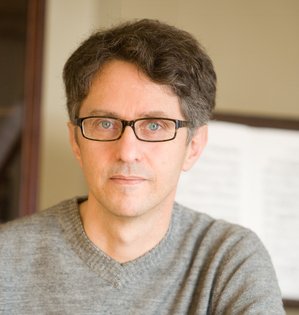 Remember the book I reviewed last month, By Fire, By Water? I loved that book so much that today I'm doing something new and very special: an interview with the author. Mr. Kaplan is a particularly gracious gentleman with incredible life experiences and undeniable talent, and I think you will enjoy this interview as much as I did.
A little bit about the author first: Mitchell James Kaplan graduated with honors from Yale University, where he won the Paine Memorial Prize for Best Long-Form Senior Essay submitted to the English Department. His first mentor was the author William Styron. After college, Kaplan lived in Paris, France, where he worked as a translator, then in Southern California, where he worked as a screenwriter and in film production. Now he lives in Mt. Lebanon, Pennsylvania with his family. "By Fire, By Water" is his first novel.
And now I give you Mr. Mitchell James Kaplan!

Part 1: By Fire, By Water
Q: What was the most challenging part of writing this novel? What was the most enjoyable?
A: The challenge and the pleasure are closely intertwined. There's something puzzle-like about finding all the pieces, holding them in your mind, and working out the best way to fit them together. Sometimes it can be frustrating. I remember telling my wife while writing By Fire, By Water that it felt like I was wrestling with a bear. But it's tremendously rewarding because you feel like you're decoding human experience. Which brings me to a point dear to my heart. I don't think the “realities” of daily experience and history books are the ultimate realities. I think those realities are more like rough drafts. It's up to artists to revise them into works that reflect meaning, coherence, and mystery.
Q: How similar are your characters to you and/or people in your social circle?
A: Some of them do reflect me and people I know. Others do not. For example, when I wrote about Queen Ysabel, I was aware that she thought and acted like an upper-class woman I knew when I was living in France. I hadn't thought about her in years, but there she suddenly was, her way of holding herself, her voice, as real as if no time had passed. Santangel's identity issues and his cautious, deliberate ways of dealing with them remind me of several people. Judith is in some ways similar to my wife Annie, especially in her values. Colòn reminds me in some ways of myself and also of Don Quixote. Other characters – Torquemada, Pedro Guttierez, King Fernando – sprang out of the aether. I was pleased to make their acquaintance. In many ways, they surprised me.

Part 2: On Writing
Q: When and why did you begin writing?
A: I started seriously writing and dreaming of being a novelist when I was fifteen. I've been writing ever since. This goes back to what I was saying above about decoding experience. So much about life seemed incomprehensible to me. I felt a need to make sense of it, and I thought some of my favorite writers managed to do so – or at least to make valiant efforts. Those efforts seemed more worthy than other pursuits. I never really worried about making a living and still don't – even though I should!
Q: Where do you find inspiration in general?
A: A lot of things happen when I sleep. I wake early in the morning – preferably, around three – and get my best work done before everyone else is awake. Solitude is part of it. So is darkness. But it's largely just about coming out of sleep and sliding into the world of my so-called fiction without interruption.
In terms of content: for me, the process starts with ideas. Certain ideas fascinate me. From these ideas, I find the historical period. From the history, characters emerge, and from the characters, stories – various experiences of history, different angles.
Q: What can you tell us about your next book?
A: I'm exploring what happened leading up to AD 70, when the Romans destroyed Jerusalem, and the survival of two of the many forms of Judaean faith, one of which was destined to develop into what we call Christianity, and the other into what we call Judaism. It is a mind-blowing adventure for me.

Part 3: On Reading
Q: What were your favourite books growing up and why?
A: As a little boy I loved reading biographies. As a teen, I became absorbed in novels and plays. I read through Borges, Hesse, a lot of Hawthorne, Emerson, and Melville, plays by Tennessee Williams, Arthur Miller, Eugene O'Neil, and others. Later, I came to love poetry – early Wallace Stevens, Baudelaire – as well as Tolstoy, Proust, and other 19th and twentieth century continental novelists.
I'd have to list at least three favorites from my teenage years, Herman Hesse's Steppenwolf, Dostoevsky's Crime and Punishment, and Hawthorne's Scarlet Letter. I remember becoming totally immersed in those worlds. I related powerfully to the protagonists – their pain, their confusion, their intense desire to make sense of it all. I haven't returned to those books since I was fifteen, so I have no idea how I would feel about them if I read them today. But the memories remain powerful. Which brings me to another of my favorite subjects. If our identities largely result from our experience of life, and if reading is an important part of experience for many people like you and me, then isn't it interesting to reflect that our identities – who we are – come from books (and from dreams) just as much as from experiences of the "real" world?
Q: Where can we find you? (sites, links, FB, twitter, author page)
A: Website: www.mitchelljameskaplan.com, Facebook: mitchelljameskaplan, Twitter: mitchelljkaplan

I personally can't wait to read the new book Mitchell is working on, if By Fire, By Water is any indication it will be excellent. By the way, have you read By Fire, By Water? No? You're missing out. I'm serious. Go buy it now.
Posted by Unknown at 8:26 PM