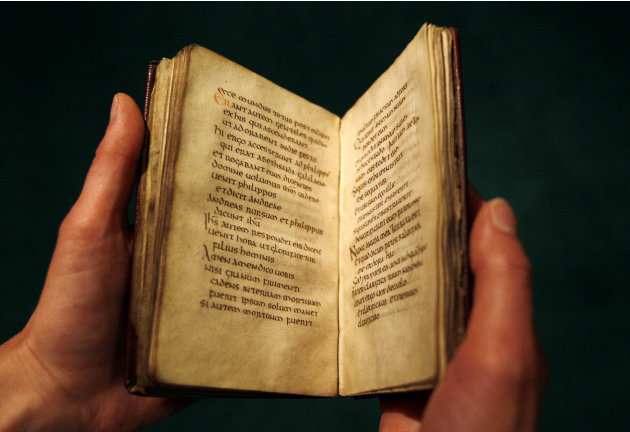 When it came time to decide what to blog about today I remembered an article from the recent news about the British Library acquiring a certain book for nine million pounds ($14 million). That's a nice chunk of change for a book, don't you think? Especially for one that is this small. The book in question is the St. Cuthbert Gospel, the earliest fully intact European book, created in the 7th century and discovered in a saint's coffin more than 900 years ago. For the full slideshow including photographs of the book's beautiful cover click here.

Here is what Reuters has to say about this news:


The manuscript copy of the Gospel of St. John called the St. Cuthbert Gospel was produced in the northeast of England in the late 7th century and was placed in the saint's coffin on the island of Lindisfarne, probably in 698.
His remains were carried to the mainland when the monks and people of the island fled Viking invaders, and ended up in Durham where the coffin was opened in 1104 and the gospel discovered.
Cuthbert's body was reburied in the new Norman cathedral there and became a focal point for pilgrims.
"It is undoubtedly one of the world's most important books," said Scot McKendrick, head of history and classics at the British Library.
"Most people who know about books know about the St. Cuthbert Gospel. The staggering fact is that we don't have a European book that looks as it did when it was made before this. It's quite astonishing."
According to the British Library, which has had the gospel on long-term loan since 1979 and exhibited it regularly, it will be displayed open temporarily after conservationists and curators deemed it safe to do so.
The manuscript features an original red leather binding in excellent condition and is the only surviving "high status" manuscript from this period of British history to retain its original appearance both inside and out.
In 2010, the library was approached by auction house Christie's who were acting on behalf of the gospel's owners the Society of Jesus (British Province), or Jesuits.
The national library was given first option to purchase the manuscript which was valued at nine million pounds.
Scot said that Jesuits came into possession of the prized artifact in the middle of the 18th century.
The Earl of Lichfield gave it to a priest who in turn passed it to Jesuits living in Europe. They later brought it to Stonyhurst, northwest England, explaining why it was formerly known as the Stonyhurst Gospel.
Little is known of its whereabouts between 1104 and the 1700s, although academics assume it was kept in Durham for much of that time.
Half of the price of the gospel came from the National Heritage Memorial Fund, established in 1980 to safeguard works of art and wildlife havens for the nation.
Other major gifts came from the Art Fund, Garfield Weston Foundation and the Foyle Foundation as well as donations from unnamed charitable trusts and individuals.
The book will be displayed to the public equally in London and the northeast after a formal partnership was agreed between the British Library, Durham University and Durham Cathedral.
The British Library has opened a special display exploring the creation, travels and "near-miraculous" survival of the gospel across 13 centuries and it has also been digitized and made freely available online.

Isn't it amazing that something so old can be so well-preserved? I am in awe.
Posted by Unknown at 9:28 PM