Happy New Year, everybody! Kicking off 2013 with a little post about one of my must-see destinations on the trip to New York City last November. I wouldn't have missed it for anything and hope you enjoy the highlights tour. 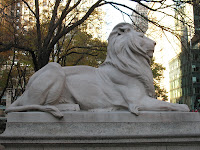 Often referred to as the "main branch," landmark building on Fifth Avenue and 42nd Street is a popular tourist destination and the lions flanking the entrance are arguably as well known as the Statue of Liberty itself. Its non-circulating graduate-level collections were initially formed from the consolidation of the Astor and Lenox Libraries, and have evolved into one of the world's preeminent public resources for the study of human thought, action, and experience - from anthropology and archaeology, to religion, sports, world history, and literature. Only children under 12 can check out books from this branch - they have their own Children's Wing. 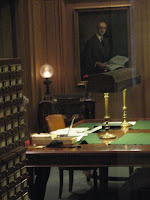 I was extremely fortunate during my visit and had the opportunity to see the Charles Dickens: The Key to Character while I was waiting for the guided tour, and later caught a glimpse of Dickens' original writing desk and chair, complete with the lamp he used (you can see it in the very back of the research room in the picture on the left). The tour guide told us that during an official visit many years ago a prominent politician was invited to sit in the chair and true to his nature of never doing anything half-way the gentleman put so much force into the task that he broke the seat and had to be extricated. The chair was repaired and since then it and the desk are kept behind closed doors with strict orders that nobody should sit in it.
The Stephen A. Schwarzman Building is renowned for the extraordinary comprehensiveness of its historical collections. It houses some 15 million items, among them priceless medieval manuscripts, ancient Japanese scrolls, contemporary novels and poetry, as well as baseball cards, dime novels, and comic books. The collection is multi-lingual and the collections in the Dorot Jewish Division and the Slavic and East European Collections are particularly extensive. The guide was telling us that the first book to ever be checked out of the library when it was first opened to the public in 1911 was a volume in Russian called Ethical Ideas of Our Time, a study of Friedrich Nietzsche and Leo Tolstoi. The Slavic collection received an enormous influx of materials after the Russian revolution of 1917 when the newly-formed Soviet government was short on funds and decided to sell the Tsarist library. They extended the invitation to bid to the NYPL and the library sent their chief librarians to Russia to examine what was available. The librarians acquired a large number of books and manuscripts at very reasonable prices and now The New York Public Library’s holdings of Slavic and East European materials extend from early 14th century illuminated manuscripts to the latest imprints with hundreds of thousands of titles available to researchers. 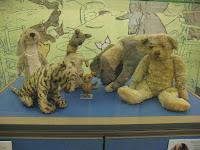 My last stop was in the Children's Wing where the library was holding a showcase of the original toys that inspired A.A. Milne in his creation of the Winnie-the-Pooh stories. He bought the bear for his son's first birthday and from there the collection grew. Now I want to read the Pooh stories again...
Posted by Unknown at 11:53 AM