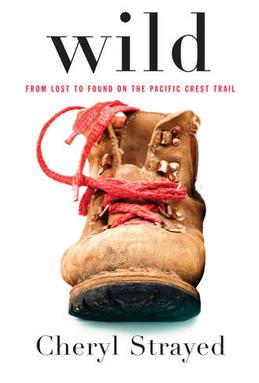 There are books that stay with you, that you remember and think about after finishing them. Then there are others, ones that fade away within days and you remember them only after checking the reading log. This one is both for me. While I was reading it there were so many instances that resonated with me, yet a week after finishing the book it took referencing notes to remember it.
I think one of the reasons may be that all the good parts were so thoroughly intermixed with a blow-by-blow account of the routine of hiking the PCT that they were practically obscured. The body odor, the blisters and bandages, the dehydrated food, the heaviest pack on the trail and the concerns over unsightly patches of skin... There is so much of it that the times when she gathered up her will and kept going despite the fear, the times when the impulsive, self-destructive Cheryl who didn't plan well and ruined her marriage for reasons even she didn't know faded into the past and the woman of enormous grit appeared got almost lost among the repeated lamentations over sweatiness and stale nuts. It's one thing to read about the experience of crossing a treacherous part of the trail or coming to terms with her mother's death, it's quite another having to read time and time again about condoms.
Speaking of which, it's odd to me that the things that Cheryl chose to reveal are of the sort that don't do much for the story but rather feed the most base curiosities and voyeuristic tendencies. The readers get front-row seats to her using a menstrual sponge, her fantasies about men and her romantic encounter, her bathing and defecating, but events that ordinarily would have tremendous impact on a person, such as having an abortion, are mentioned practically in passing. It's as if special underwear and condoms that got much more page space are exponentially more important. Some might say that it's a brave choice to talk about these things, but this sort of thing puts a damper on the experience for a reader like me. More reflection on things that matter, less bodily functions.
I heard someone comment recently on how Portland is the place where adults go to not have to grow up, as if Portland were the Oregon version of Neverland. When Cheryl set out to hike the PCT she was aimless and immature, and her plan was to be a waitress in a strange city. Incidentally it was Portland where she chose to settle. Not much of a plan, if you ask me. On the other hand, apparently it worked for her. Or maybe she grew up. After all, she is the woman who was tough enough to hike the PCT mostly alone for three months with a pack that was too heavy and boots that were too small.
Posted by Unknown at 3:27 PM