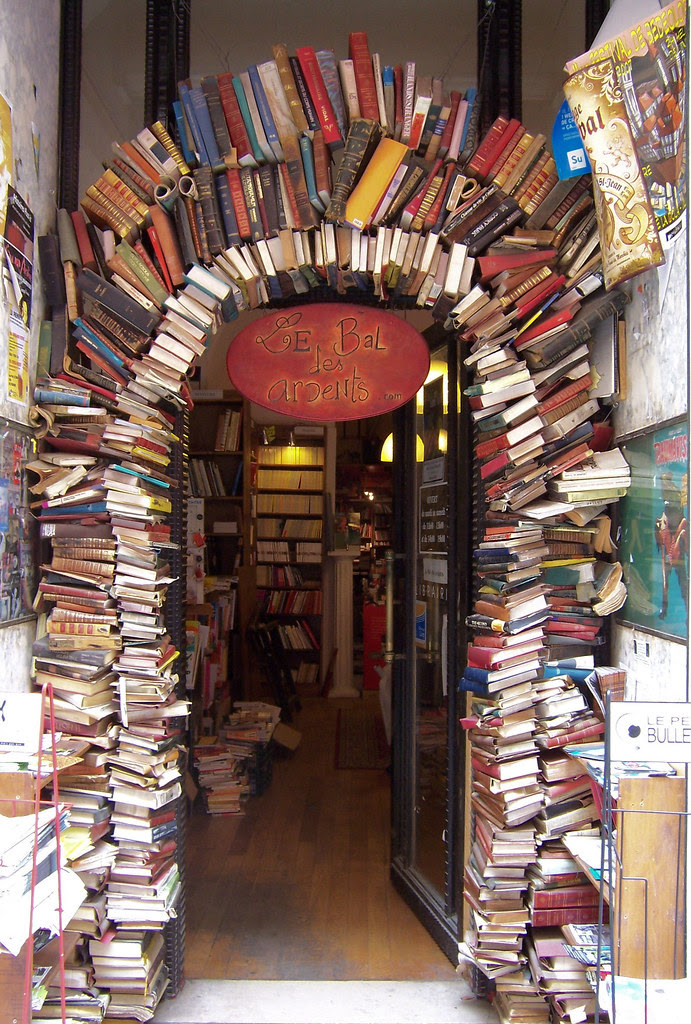 Did you notice how really old bookstores that have books piled and stacked everywhere in seemingly impossible ways often look like they're actually made of books? That's what the arch over the entrance of this store in Lyon, France made me think about. Of course this is not a fairy tale so the place is much more more organized, but the entrance is definitely eye-catching.
I wonder why this bookstore is called Le Bal des Ardents, which means "the dance of the burning ones", since the gruesome story behind the name has nothing to do with books: Le Bal des Ardents, aka the Dance of the Savages, was a masquerade ball held in 1393 in France at which dancers impersonating savages and dressed in highly flammable costumes caught fire from a torch the king's brother carelessly brought in; the king was one of the dancers (don't tell me the brother was just trying to figure out who the masked dancers were) and only he and one other dancer survived. The phrase might be an euphemism the almighty internet isn't mighty enough to explain, or an allusion to knowledge being capable of enflaming minds, but whatever the reasoning behind the name is the store is there and it is beautiful.
There are pictures and even a virtual tour on the official website (check out that ceiling!). The equivalent of the About Us section describes the store as general, but with a strong will to explore areas not usually popular, promote unsung authors and small publishers, and continually grow the catalogue. They host readings and signings and apparently are quite popular with the literary crowd. The store's official website is www.lebaldesardents.com and while there's no English page it's still fun to look around. I'll leave you to it while I go find that book I got when the idea to take up French again was new and exciting. May be it's not completely buried somewhere.
Posted by Unknown at 9:06 PM