A while back I posted about the British Royal Mail releasing a set of stamps depicting some of the most famous literary characters and today I'm back with a little more of, if not the same, then similar. You see, since last Wednesday I felt an urge to rekindle my fondness for collecting things, and there are few things as small and usually inexpensive to collect as stamps. I have also discovered that currently our US Postal Service offers two stamps from their Literary Arts series, the ones honoring Mark Twain and O.Henry (I am currently a proud owner of the latter), as well as a commemorative stamp issued to coincide with the 100th anniversary of the publication of Edgar Rice Burroughs' first story, "Under the Moons of Mars," and his first Tarzan story, "Tarzan of the Apes," in 1912. 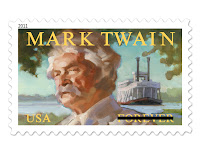 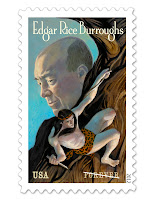 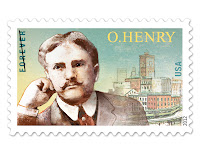 Turns out, the Literary Arts series was first introduced in 1979 with a stamp honoring John Steinbeck and since then featured 28 prominent authors in a variety of genres, including Edith Wharton (1980), Tennessee Williams (1995), Ayn Rand (1999) and Henry Wadsworth Longfellow (2007). I wonder who will be commemorated next year.
Posted by Unknown at 10:18 PM