Review: The Fault In Our Stars by John Green 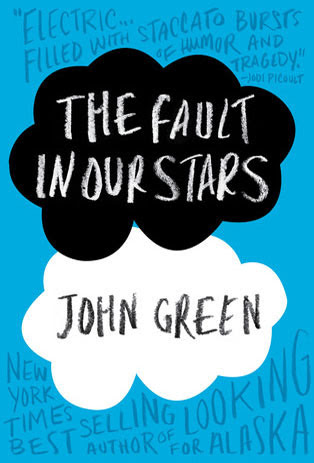 Diagnosed with Stage IV thyroid cancer at 13, Hazel was prepared to die until, at 14, a medical miracle shrunk the tumours in her lungs... for now. Two years post-miracle, sixteen-year-old Hazel is post-everything else, too; post-high school, post-friends and post-normalcy. And even though she could live for a long time (whatever that means), Hazel lives tethered to an oxygen tank, the tumours tenuously kept at bay with a constant chemical assault. Enter Augustus Waters. A match made at cancer kid support group, Augustus is gorgeous, in remission, and shockingly to her, interested in Hazel. Being with Augustus is both an unexpected destination and a long-needed journey, pushing Hazel to re-examine how sickness and health, life and death, will define her and the legacy that everyone leaves behind.

The first thing you need to know about my experience with this book is that shortly after the two-thirds mark I stayed up till 2 AM reading, tears streaming down my cheeks and the box of tissues getting emptier by the minute. The words blurred but I would just wipe my eyes clear and keep reading. And then the other day I stayed up late again re-reading the last third of the book because I just couldn't return it to the library without doing so. It was that good. You have been warned.
My favorite part about Hazel and Gus's story is their voices and personalities. They are unmistakably teenagers with occasional temper tantrums and frequent additions of "like" and "that" to their sentences, but there is a certain mature gravity to them too that I believe stems from all they've had to experience in their short lives. They understand the world in a way that I don't think is typical for teenagers, with their conversations and thoughts going from simple truths to complex concepts and back, but the way Green wrote them felt natural and appropriate. I also enjoyed the fact that parents are very present in this novel. There are so many YA books out there nowadays where the characters might as well be orphans, but not here. It has been said that parents in this book are permissive but I didn't get that sense at all. The kids have rules, they have curfews, and when they push back and get away with it there's not a sense that it's a common-place occurrence. Maybe this heightened presence of family is due to the children being more dependent on their loved ones than your average teenager but the fact remains.
I'm going to break my No Spoilers rule here, so if you don't want to know what happens just skip to the next paragraph. Here goes. I had no trouble suspending disbelief in the first half of the book although Gus being particularly handsome did make me roll my eyes a little (it seems that all love interests with very few exceptions are incredibly attractive), and despite the fact that Hazel and Gus might seem pretentious at times (who in this day and age speaks like that!) I really did like them, but then the trip to Holland happened and the book took on a fantastical dream quality to me. I'm not denying that the Wish Foundation could make it happen, but leading up to Holland everything about this novel is so grounded in reality that Gus getting in touch with Van Houten on the first try and the trip coming together all of a sudden seemed too over the top and even magical, which in this case wasn't exactly a good thing for me. And then they were back home and reality reared its ugly head, and yet I never could get rid of the fairy tale sensation through the rest of the book.
In an interview Green gave to Goodreads he talks about making a particular effort to not write a sentimental novel and I believe he succeeded. Hazel and Gus are very unsentimental characters, they accept their circumstances at face value and make the most of them. They might be angry, they might be bitter, they might be tired, but they don't allow self-pity to rule their lives. Hazel sees reality clearly and speaks her mind, Gus always puts a positive spin on any situation, and they don't treat each other like cancer kids, which gives their relationship a certain levity. This combination of practicality and optimism allows them to have a life that's as close to normal as possible, and because of it their families can keep it together through the hard times. And when those hard times come Green remains unsentimental. He talks about the physical frailty and the hits a person's spirit takes with every defeat of the body, he talks about life continuing even when it ends for some, he shows us what can happen to families when the fight is finally over. Hazel is the perfect narrator for this novel, her no-nonsense voice and straightforward account of events that is not overloaded with adjectives or descriptions put me in the middle of every scene and allowed my imagination to build on the simplicity. There is no need for many words when the imagery is already there.
Oblivion and awareness are a big theme in this novel, with the characters having almost metaphysical discussions about the universe and influencing each other's opinions as the story progresses. Green takes on the common desire to be known and remembered by the world and examines it from the flip side - what if we are loved not widely, but deeply, does that make our lives less valuable than the lives of those with worldwide renown? I don't believe it does, and for all his fame I think Green is of the same opinion.

P.S. Here is that excellent interview I mentioned.

P.P.S. [Jan. 2014] If you enjoyed the book and are ready to shed some more tears for Hazel and Gus you'll get your chance when the movie comes out!